The luxury of moral choices

So.  Like a lot of people, I have been watching the whole Greg Smith thing with great interest.  Like a lot of people, I am impressed that he made a moral decision so boldly and so publicly.  But.  But, of course, I cannot entirely ignore the disgruntled critics who say that it sure is easy to have an epiphany once you’ve padded your exit with a nice plush bank account of ill-gotten gains.  Does this somehow taint the morality of his decision?  Maybe.  Also, for me, it highlights the fact that moral choices are, to a certain extent, a luxury–and, more importantly, that our society’s incentive structure is totally fucked.

No matter what Smith does now, it cannot be denied that Goldman Sachs built his life, and to a certain extent gave him the ability to make the choice he did (moral stickiness ahoy!).  His column in the New York Times, which will bring him a lot of attention, lucre, and almost inevitably a book deal, could not have happened had he not had a career there.  Consider this: at the same time Smith was at Stanford, there was another kid there who was faced with the same choice: I can leverage this education to make a shitload of money on Wall Street.  But this kid looked at the lay of the world and said, nah, Wall Street is full of scumbags, I’m going to follow my passion and give my life to literature instead, even if my career prospects are laughably poor.  Where is this kid’s op-ed in the New York Times?

Not that said kid necessarily wants an op-ed in the NYT.  Said kid is impressed by the institutional weight of said paper but also frightened by and suspicious of it.  Said kid will probably spend a lifetime having distant and conflicted relationships with powerful institutions.  Said kid does not mind, even if sometimes said kid is like, where the fuck is my money for being awesome?  But.  Said kid acknowledges that even she had a certain amount of luxury to make the decisions that she did.  Said kid married young to a wonderful man with a steady, if not grand, salary.  If said kid had graduated from university and been out in the world struggling totally on her own without health insurance, eating instant ramen in her studio apartment every night, it is quite possible that at some point she would have said, fuck this noise, I am getting an MBA.

We live in a world where moral choices are a often luxury, and it would be so lovely if they could be an innate right.

Also.  Why did Greg Smith choose to have his poor soul sodomized for cash for twelve years when he could have joined the Peace Corps or some shit?  I will tell you.  Because our incentive structure is totally fucked.  Because a young, intelligent person with lots of options, unless they have the structural integrity of a fucking diamond or some kind of guiding passion welling from deep within, will choose the career path that will give them the most positive reinforcement.  The fact that making more money for rich people is the most lucrative and prestigious career available to said young person is bullshit.  Our priorities are fucked; our institutions are sick.  What do we do about it?

Beats the shit out of me.  I’m just in this life game to tell dirty stories and eat way too many bacon cheeseburgers. 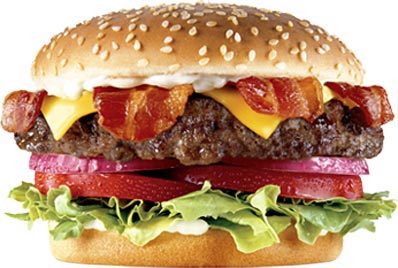 Ooooooh yes. Thank you to whoever decided that an appropriate topping for a meat patty was... MORE MEAT. You have made the world a better place.