I am so, so close to finishing In The Red I can taste it.  It’s quite thrilling, and of course the usual amount of angsty.  You know: What if it turns out that it sucks?  What if it gets rejected all over the place?  What am I supposed to do with myself after it’s done?  Actually, for that last one, I already sort of have an idea for my next novel.  It involves supernatural beings and what may or may not be a crass commercial venture.  We’ll see what comes out.  One of the things about writing novels that’s like having kids is that you can plan all you want but you have no idea what it will really turn out like until you go ahead and do it.  Decorating the nursery is different from having a live baby explosively defecate all over it, is what I’m saying.

Now, who wants to see some pretty flowers?

I was at Costco the other day and they had a great big display of orchids.  I thought it would be nice to get one or two for the living room now that the cats are old enough to not automatically murder every plant that comes within chewing radius.  I looked through them but they were all broken or half-dead in some way, as if they had been brought to the store in some ghastly orchid slave ship.  Then I remembered where I had seen some super gorgeous orchids for sale.  Guess.

They were at the local branch of Fry’s.  Yep.  I went to an electronics store to buy flowers.  And it turns out that Fry’s is really good at flowers!  Check it out: 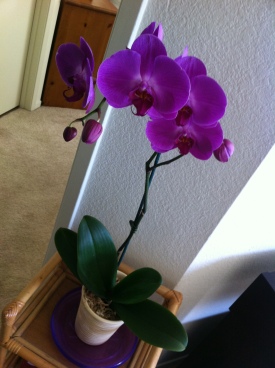 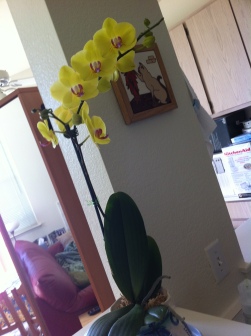 Given that I did not have little dishes to put the plants in, I repurposed a couple of old Frisbees as flower pot plates.  I had three old Frisbees, and two plants.  You know what that means.  It pretty much guaranteed the purchase of a third plant.  For the sake of completeness, you see.  Meet my new little writing desk friend, an African violet from Orchard Supply: 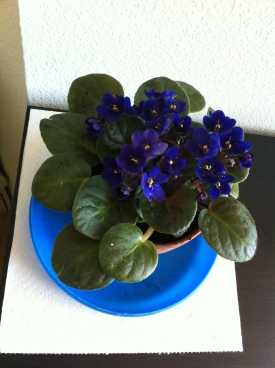 It looks exactly like an African violet that was butchered by a kitten that shall remain nameless in 2003.  Said kitten is older and more sedate now, so hopefully this plant will not meet the unfortunate fate of its former brethren.  Wish it good luck and godspeed.