Who loves a kitty?

Writing is palimpsest.  Oftentimes I will reuse pieces of old pieces for new pieces.  I will write a story.  Years later I will write it again, reusing elements of a different story.  Or, I will pick up some neat thing in someone else’s work and try to play with it, transmute it into my own thing.  It’s all part of a continuous churn.  For instance, last year I was doing translations of Valéry prose poems.  I became inhabited by this dude and his voice, then created the best approximation I could manage of his voice in English.  That approximation was its own entity, and when I was done translating, I wrote a couple of my own prose poems in that voice.  Here is one:

Knowing is unknowing when the page is so covered in scribbles that it is necessary to erase in order to write. At the apex of the day, the sun’s heat whites out my thoughts; if there was a wind I might let it scatter the paper but all is stillness and languor. The weather mirrors my torpor; the words appear and disappear too quickly for me to catch them, only leaving behind a faint disturbance in my body like the radiating wave that is the only evidence of an object having been dropped in a pond. A pebble, an acorn, a thought. A thought light enough might float, like a feather, drifting soundless on the glittering opacity of the surface. But I am weak at such thoughts, I am all weight and slow sinking. I am the remnant bubble that hurries where the water meets air only to vanish—an inaudible pop then nothingness.

On the sprawled papers a cat sleeps, her dark fur warmed by the sun’s caress. Her whiskers twitch; her animal dreams emanate from her like a vapor: blurry images without words, inscrutable to a plodding consciousness that burdens itself with language. I put my hand on her side, on the serene rhythm of her breath, and she rolls, trilling gently, to expose her soft belly for a pet. Loved by both my hand and the noonday kiss of the sun’s beams, she purrs without even opening her eyes to see who reaches for her through her dreams. Her eyes, yellow as a lick of flame, closed in trust and pleasure.

Today I was writing a scene in which the protagonist of my novel finally makes contact with the cat she has adopted, a cat who has been slinking around her apartment like a prisoner for days and whom she has been unable to name.  I remembered the above prose poem from last year and the scene became the following:

I find her asleep in the middle of the living room carpet, soaking in beams from the noon sun.  Her whiskers twitch; I can almost see her animal dreams emanating from her like a vapor—blurry images without words, all movement and feeling.  Up until now I have only seen her sleep as a neat little ball tucked in a corner that can only be approached from one direction—floating just beneath consciousness, her eyes popping open at the slightest noise, the white film beneath her lids pulling back fast.  But here she is sprawled luxuriously, all slack limbs and serene breathing.  Her dark fur looks so soft.  I crouch next to her as quietly as I can, not wanting to break her peace but not wanting to leave it alone either.  I put my hand on her side, lightly, and feel her heave a deep sigh.  Gently I pet her tiny sun-warm body and then—she rolls over, trilling faintly, to expose the white fur on her belly.  The surrender is so sweet and so simple, she purrs without even opening her eyes to see who reaches her through her dreams.  For a long time we are this way; it is my first love touch since the last time Andrei had me in his arms.  So sweet and so simple—why are we not always this way?

After a while, her eyes slowly open; I see her recognize me.  I hear the final yes in her uninterrupted purr.  As the tears pour down my face I decide that she is called, of all things, Miorita.

Repetition yet not, such is all speech. 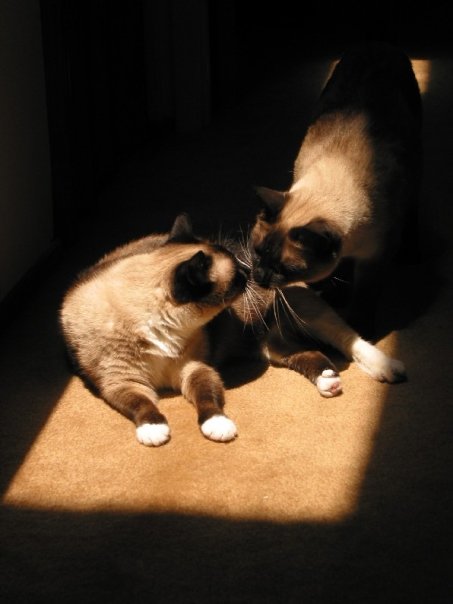 Now that I have outed myself as an unabashed cat lover, I might as well include a photo of my own two little house lions.

This entry was posted in palimpsest, writing and tagged cats, In the Red, palimpsest, Paul Valéry, translation, writing. Bookmark the permalink.

2 responses to “Who loves a kitty?”